Jakarta, 26 October 2016: The Director General of Plantations at the Ministry of Agriculture, along with regents from the districts of Gunung Mas, Kotawaringin Barat and Seruyan (Central Kalimantan), and INOBU, Wednesday, October 26th have announced a major new initiative for sustainable palm oil namely SIPKEBUN (Sistem Informasi dan Pemantauan Kinerja Perkebunan Berkelanjutan) or “The Information and Performance Monitoring System for Sustainable Plantations” as a part of their commitment to encourage sustainable oil palm plantations through a jurisdictional approach.

“SIPKEBUN is a government initiative in the plantation sector which is in accordance with Law No. 39/2014 on Plantations and a way of accelerating the implementation of e-government within every government unit based on Presidential Instruction no. 3/2003 on the Policies and National Strategy for Developing E-Government,” said Ir. Bambang MM, the Director General of Plantations, Ministry of Agriculture.

Following this, he added that “according to Law no. 39/2014, especially Article 4 that states that the scope of plantation regulations encompasses data and information systems. SIPKEBUN is one of the government strategies for strengthening the database for plantation commodities, especially palm oil. SIPKEBUN can be used for other plantation commodities in accordance with the priorities of the Ministry of Agriculture. By building a strong database, the government can know the actual problems faced by regions so that the planning and decision making processes related to the programs for developing palm oil and other plantation commodities can be properly implemented.”

The Department of Plantations of Central Kalimantan, Rawing Rambang added that SIPKEBUN was envisioned long ago in Central Kalimantan, since the enactment of the Provincial Regulation on Sustainable Plantations No 5/2011. “SIPKEBUN is expected to inform us about actual plantation developments and their compliance with various regulations, which will become an integral part of the Plantation Business Assessment,” said Rawing Rambang.

The Regent of Seruyan District, Sudarsono stated that SIPKEBUN will not only monitor plantations but also be an opportunity for collaboration between the Central and Regional governments. “This collaboration is expected to systematically accelerate the resolution of problems with plantations that regional governments have faced for a long while” said Sudarsono. He gave some examples of problems, such as forest and peat fires, conflict over land uses in forest areas and empowering smallholder farmers.

” Smallholder farmers are one of the key actors in the palm oil supply chain. Our initiative for registering farmers is one effort for strengthening their legality. We hope that this collaboration will support our work in Kotawaringin Barat more systematically,” said Bambang Purwanto, the Regent of Kotawaringin Barat district.

So far, Kotawaringin Barat has issued some samples of Registration Letter of Cultivation (Surat Tanda Daftar Budidaya or STD-B) for smallholder farmers and they are processing the other 143 letters. The numbers are increasing due to ongoing verification process.

Joko Arif, the Managing Director of INOBU, hopes collaborative efforts like this can be replicated in other places in Indonesia. He hopes that plantation information systems and other instruments for achieving sustainable provinces as well as districts and municipalities, such as mapping, legalising land, resolving conflict and protecting areas with high conservation values, can become national achievements. “There have been few collaborations like this… Our organisation hopes that other provinces and districts will compete to implement initiatives like this,” said Joko Arif. 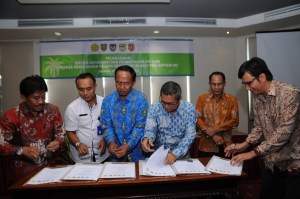 The signing of the Memorandum of Understanding (MoU) between the Ministry of Agriculture Rl, Central Kalimantan Province and District Pilot (Kab. Seruyan, Kotawaringin Barat, Gunung Mas) and the Institute of Innovation Research Earth (INOBU)

SIPKEBUN, which was developed by Institut Penelitian Inovasi Bumi (INOBU) in collaboration with the Ministry of Agriculture, the provincial and three district governments of Central Kalimantan, is an online system that integrates data and maps of all oil palm growers: from industrial scale estates to independent smallholder farmers. For the first time, the Indonesian government will be able to monitor online all oil palm growers and identify growers who are farming sustainably, and those who are clearing forests or burning their lands. SIPKEBUN also enables the government to know who is growing oil palm, where they are growing it and how they are growing it.