Sustainable Cocoa Production in the Amazon

As one of the world’s largest chocolate makers, cocoa is vital to Mondelēz International’s business. Our cocoa sustainability program Cocoa Life ensures it is made right. We recently announced ambitious, industry-leading action plans to protect and restore forests in cocoa-growing areas as part of the Cocoa and Forests Initiative (CFI).

The CFI is a great example of public-private partnership with a jurisdictional approach. It involves major chocolate companies and cocoa traders, NGOs and the national governments of the world’s top two cocoa producing countries, with a shared goal to eliminate deforestation linked to cocoa production.

Our action plans focus on the CFI countries of Côte d’Ivoire and Ghana – where the challenge of deforestation is most acute – and Indonesia, taking us above and beyond our CFI commitment. They focus on three pillars of action:

This innovative farmer-and-community centered approach to forest protection and restoration also extends to the north region of Brazil. In 2018, we expanded our program to empower at least 500 cocoa farmers and 1000 families in the region, promoting cocoa agroforestry as a productive way to restore land. As part of this expansion, we have launched a new collaboration with The Nature Conservancy. All cocoa beans produced by these famers will be sourced for Mondelēz’s Lacta chocolate brand. 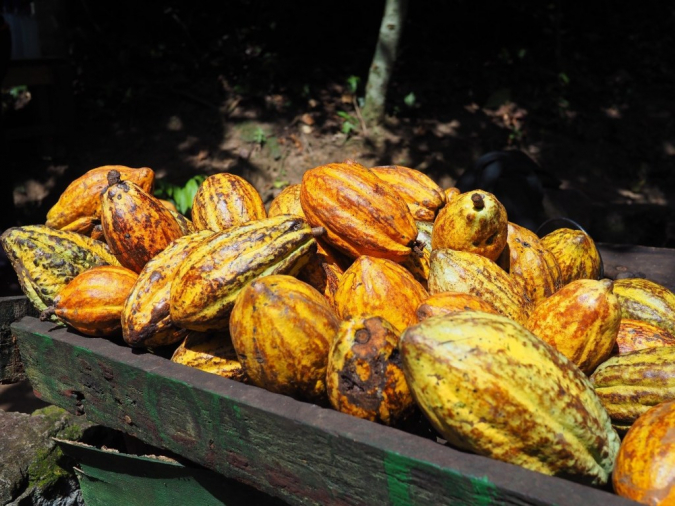 In Para, the north region of Brazil, saw a booming cattle ranching culture in the late 80’s. This had a major effect on the land, as large parts of the Amazon forest were cut down and turned into pasture. Today, farmers in the region see the cocoa crop as a way to bring the land back to life, and protect the Amazon. Cocoa and other species native to the Amazon ecosystem have the power to support livelihoods and help build productive forest lands.

In this region we are investing around $200,000 per year over the next three years. Across the region we’re deploying six demonstration plots to share these best practices; transforming 1,000 hectares of pasture land into cocoa agroforestry; and restoring 500 hectares of riverbank forests. These will contribute to improving the yield and quality of the cocoa produced, reducing the incentive for farmers to expand into additional forests.

By learning new crop techniques through training, Deniston Dutra, a cocoa farmer in São Félix do Xingu, Pará, saw that the benefits for cocoa productivity.  He said: “I saw that planting trees or leaving the trees that sprouted alongside cocoa, there was mutual benefit, because I was preserving, and increasing productivity, because cocoa needs shade.”

In Bahia state where the program originally started in 2014 with scientific seed research, Cocoa Life will continue providing guidance on the latest techniques in farm rejuvenation and good agricultural practices. Based on our learnings in both regions, we can expand and take these learnings to other regions.

Despite the indication we’ve seen of forest positive farmer behaviors in Brazil, we know we cannot be complacent as cocoa farming grows in Latin America. Brazil has the largest forest that needs to be protected and lots of land that was destroyed by cattle needs to be restored. Key to the fight to eliminate deforestation is true cross-sector collaboration and commitment, like the CFI. We therefore invite everyone to take the learnings from a multi-stakeholder platform like CFI and see how this can be replicated in the Brazilian context.  Having such a platform for Brazil would be a significant milestone that would need to be rapidly followed by the right actions and financial investment.