Liberia and Colombia: A Dual Test of Supply Chain Sustainability

Trace your finger around a globe about six degrees north of the equator, and you’ll run over tiny Liberia and through mid-sized Colombia. Plop down into the countries themselves, and you’ll find the kind of thick, rich forest that most countries along this latitude have long since ground into pulp and turned over to palm, soy, or cattle.

These two countries initially avoided that fate by default, because civil war had rendered their forests unsafe for chopping. Today, however, they hope to avoid it by design, as they struggle to develop their rural economies without destroying their countryside.

Both countries aim to do so in part by sustainably developing their palm oil sectors, and that means engaging the Roundtable on Sustainable Palm Oil (RSPO) in areas that have not yet been turned into palm oil plantations.

Liberia’s civil war ended in 2003, six years before the 400 companies comprising the Consumer Goods Forum (CGF) endorsed a resolution to end deforestation from key commodities by 2020. Colombia’s peace came in 2016, which is seven years after the CGF resolution and two years after dozens of private, governmental, and non-governmental organizations endorsed the New York Declaration on Forests (NYDF), which is a set of ten goals designed to cut natural forest loss in half by 2020 and end it by 2030.

Colombia thus began with more arrows in its quiver than Liberia had, and it was also able to identify large swathes of natural plain and previously degraded forest where it could grant palm oil plantations.

The Liberian government started granting palm-oil concessions in 2008, and it eventually granted four: one to UK-based Equatorial Palm Oil (EPO), one to Malaysia-based Sime Darby, one to Indonesia-based Golden Veroleum Liberia (GVL), and one to Ivory Coast-based SIFCA. All four companies were members of RSPO, and only one concession – SIFCA’s – was on that had already been cleared.

The other three faced problems from the start. First, they found large swathes of their concessions met the definition of “high-conservation-value” (HCV) forest, which forced them to dramatically reduce the amount of land they could develop. Then, they each found that displaced people had moved into the concession area during the decades of war – and these people filed grievances with the RSPO.

Initially, Sime Darby and GVL renegotiated their concessions to include independent farmers, but GVL then withdrew its concession from RSPO in late 2018. 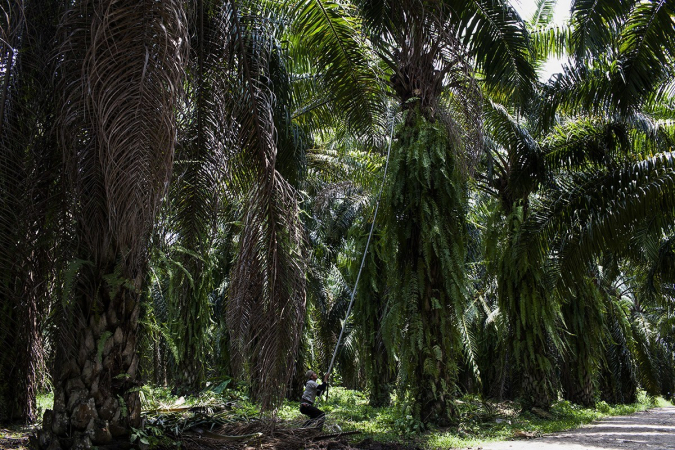 Colombia’s experiment began in 2016, but was able to become a member of TFA from the start.

Of the four agricultural commodities that TFA focuses on, the government had identified three – timber, palm oil, and cattle – as growth markets. It then divided cattle into two categories: beef and dairy, and began laying the groundwork for “zero deforestation agreements” in all four commodities (timber, palm oil, beef, and dairy).

They prioritized palm oil, which is produced on more than 550 thousand hectares of land distributed across 64 locations, with 60% of the production consumed domestically for biofuels, food, and cosmetics, and 40% exported mainly to Europe.

Exports increased at roughly 40 percent annually until 2018, and an analysis of the country’s soils identified 16 million hectares suitable for oil palm cultivation, much of it in or near forested areas. The government and the National Federation of Oil Palm Growers (Fedepalma) have agreed to expand production in ways that avoid deforestation, in the hope of establishing Colombia as deforestation-free producer and raising the bar for pre-competitive practices.

The Global Green Growth Institute (GGGI) took the lead in negotiating a comprehensive zero-deforestation commitment for palm oil built on clear definitions of forest and deforestation, and building on the country’s REDD Readiness efforts to deliver measurement, reporting, and verification (MRV) of land-use activities.

Under the agreement, companies are committed to first conducting a risk assessment of their own supply chains and then establishing zero-deforestation goals with clear deadlines. They agree to conduct high conservation value/high carbon stock (HCV/HCS) assessments before expanding any operations, and they must generate policies across suppliers and implement transparent reporting regimes as well.

The Colombia Alliance officially launched on November 28 of 2017, creating a platform for all sectors to cooperate in the creation of a zero-deforestation agricultural economy.

Both countries face tremendous challenges as they seek to develop their rural economies without destroying their forests, but success will ultimately depend on the willingness of importing countries to pay more for sustainably-produced goods. The European Union has already passed key legislation ensuring just that, which is good for Colombia but leaves Liberia in the lurch.

Several land-use experts have proposed the creation of offsetting mechanisms that would let concessionaires chop their Liberian forest if they restore or conserve forest elsewhere, while others have argued that sustainable palm-oil production is simply not achievable in the country.