Tropical forests: can profit and protection go hand in hand?

There is a perception that sustainable land use and forest conservation come at the cost of economic prosperity. New research finds that this is not the case.

Forests cover approximately 30% of the land on our planet. Not only do they provide oxygen and a home for much of the world’s wildlife, but 1.6 billion people also rely on them for basic needs such as fresh water, clothing, traditional medicine and shelter.

Despite an increasing focus on sustainable land use, the rate of deforestation is still high. As much as 58,000 squares miles of forest are lost each year, according to the World Wildlife Fund. Scientists estimate that 12% of global greenhouse gas emissions come from this loss.

In response to these challenges, the Tropical Forest Alliance (TFA) 2020 was created to help governments, the private sector and civil society reduce tropical deforestation related to key agricultural commodities within the next five years. The production of commodities such as soy, beef, paper and palm oil is thought to be responsible for half of the world’s tropical forest loss.

The challenge is at a critical juncture. While there has been strong commitment from many consumer goods companies and governments, many stakeholders, particularly in producer countries, perceive commitments to end deforestation as being anti-development. This perception, combined with other institutional challenges in these forest-rich countries, has meant progress is slower than hoped.

The problem with the current debate is that it’s dominated by anecdotes rather than compelling evidence. Analysis is hampered by the fact that in many of these forest-frontier regions, economic data is often absent or not particularly robust. In addition, the timeframe hasn’t been long enough to understand the impact, and there has been no control group to measure progress against.

Despite the data challenges, the available evidence suggests a few key findings:

■ Sustainable land use and local economic prosperity can go hand in hand
Sustainable production processes were found to be associated with a strongly positive economic impact, including local employment, incomes and wider economic growth (see the chart below). For example, pilot efforts in Benin, Cape Verde, India and Rwanda have been able to reduce post-harvest food waste by more than 60%, with many of the techniques promising to increase the incomes of smallholders by more than 30%.

■ Local economic impact varies greatly across the sustainable land-use levers
The local economic impact was extremely positive for some levers (smallholder yield improvement, reduction of post-harvest food waste, land certification) and generally weaker for other interventions (development of alternative livelihoods, such as eco-tourism).

■ It’s not necessarily what you do, but how you do it
The economic impact often depends on the specific context of an intervention. For example, improvements in smallholder farming practices were often found to have a significant impact on rural incomes when they were accompanied by other complimentary interventions (such as investments in infrastructure enabling market access). Similarly, land certification approaches across Africa, Asia and Latin America have had a varied local economic impact due to the different local contexts and the specific design of the interventions. 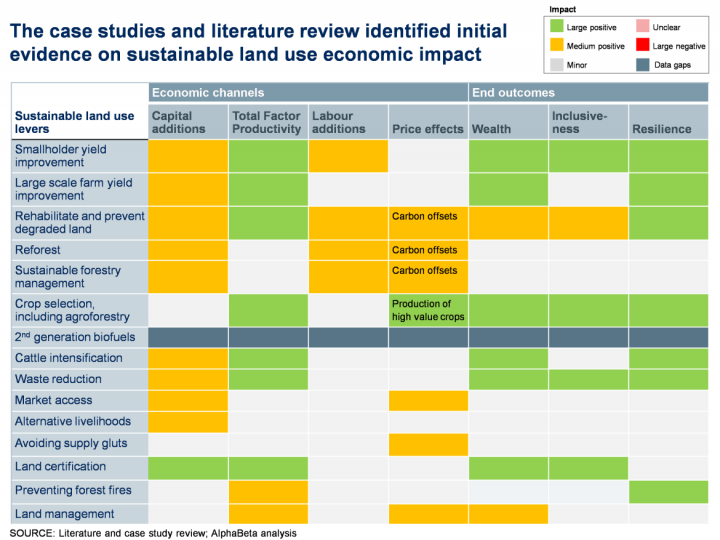 While more research is needed to address the data gaps in this area, our initial findings suggest that there is a better model for local economic growth with forests.