Q&A: Why saving our forests should be a global priority?

This In 2010, several private-sector companies made bold commitments to remove deforestation from major commodity supply chains by 2020. Since then, many others have joined this effort through the New York Declaration on Forests and the Sustainable Development Goals.

Although much progress has been made to implement these commitments, the outlook for the forests is bleak. In 2016, global tree cover loss reached a record 29.7 million hectares, and this loss – totalling an area about the size of New Zealand – is 51% higher than the previous year. Assessments indicate that the international community will miss its 2020 target, and with less than 1,000 days to go, the need for action on the forest agenda has never been more urgent.

But the real question is: why do forests matter? We turn to Frances Seymour, Distinguished Senior Fellow at the World Resources Institute and author of Why Forests? Why Now? to help us understand why we must do everything we can to halt deforestation.

1. All eyes are on Davos as global leaders gather together to shape the future. What brings you to Davos and what do you hope to contribute?

I’m on a mission to raise awareness of the importance of forests, the urgency of stopping deforestation, and the feasibility of doing so. As discussed at “Forests Day” during the climate negotiations in Bonn in November 2017, forests are the Cinderella of climate change: in the same way that Cinderella cleaned the ashes from the fireplace and got no respect from the rest of the household, forests clean up the emissions from fossil fuels in the atmosphere by absorbing carbon. Yet efforts to protect forests get nowhere near their fair share of political attention and finance compared to solutions focused on reducing emissions from energy use. 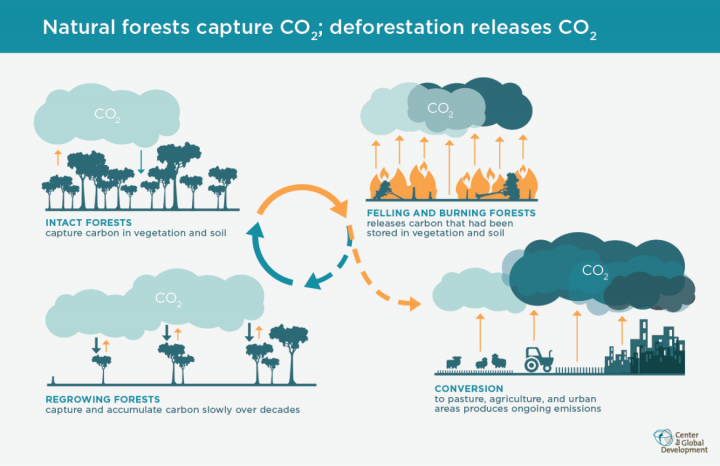 I also want to help illuminate the links between forests and key items on the programme at Davos: sustainable agriculture and food security. In addition to helping stabilise the global climate, emerging science is showing how forests influence the weather, from providing cooling services to nearby agricultural fields, to generating rainfall at continental distances. 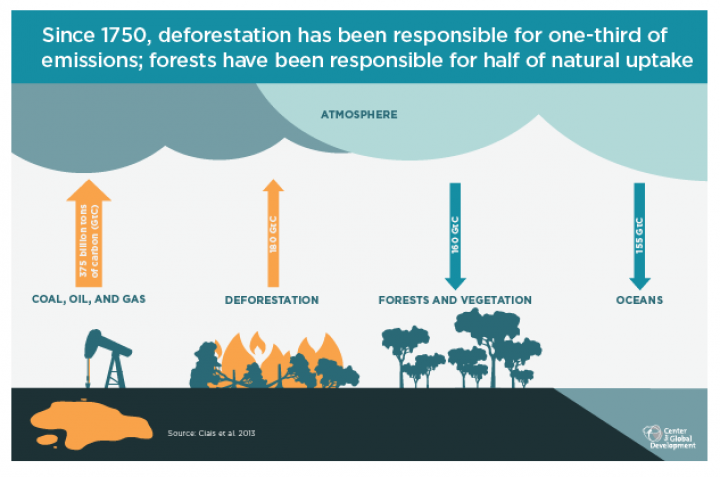 The leaders who gather at Davos can do a lot to raise the profile of forests on the global agenda, and to shift recognition and resources to the indigenous communities, NGOs, public sector agencies, and progressive companies that are working to protect the world’s remaining forests.

2. Why do forests matter? What role do they have in creating a shared sustainable future?

Forests are critical to achieving the goals of the Paris Agreement on climate change, both as a large part of the problem, and an even larger part of the solution. If tropical deforestation were a country, it would rank third after China and the United States as a source of the greenhouse gas emissions that cause climate change, and those emissions must be reduced if we are to keep global warming below 1.5 degrees Celsius.

And as the only safe, natural, and proven technology for carbon capture and storage, forests are our best hope for balancing carbon emissions with removals. Halting deforestation and allowing damaged forests to grow back would be equivalent to reducing current emissions from all sources by up to 30%. 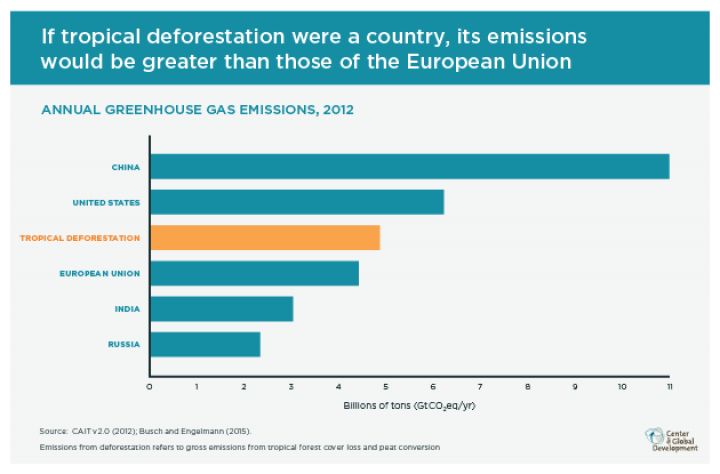 Goods and services provided by forests also make important contributions toward achieving the UN Sustainable Development Goals. Although wild products provided by the forest are significant source of income and nutrition, invisible ecosystem services that forests provide to local communities and to national economies can be more important. For example, natural forest cover buffers human communities from the impacts of climate change, such as the wind and waves from more frequent and severe coastal storms, and the flooding and landslides caused by heavy rainfall events. 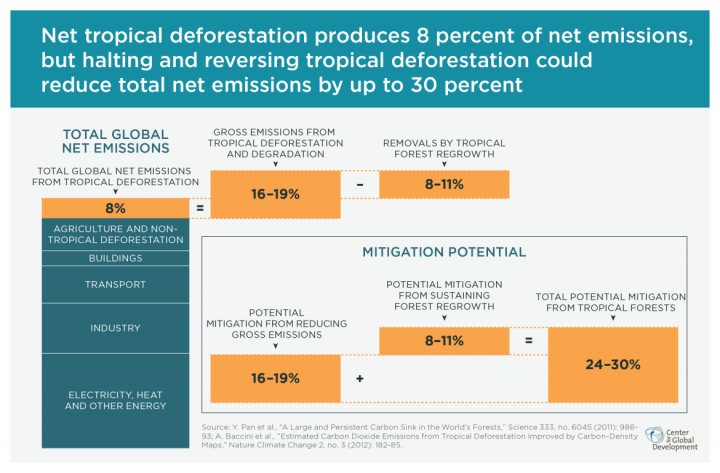 3. What is at stake here? Why should government and the business community take action?

The science is clear that climate change will inflict disproportionate suffering on poor households and poor countries, so harnessing the potential of forests to mitigate that suffering is a moral imperative. At the same time, forests are the setting for deadly struggles over social justice at the local level. Much of the world’s remaining forest areas are within the customary territories of indigenous peoples, whose livelihoods and cultural integrity depend on maintaining forests. Yet deforestation rates continue to increase, principally due to the relentless expansion of agriculture to produce globally traded commodities such as soy, beef, palm oil, and fast-growing timber to feed pulp and paper mills. 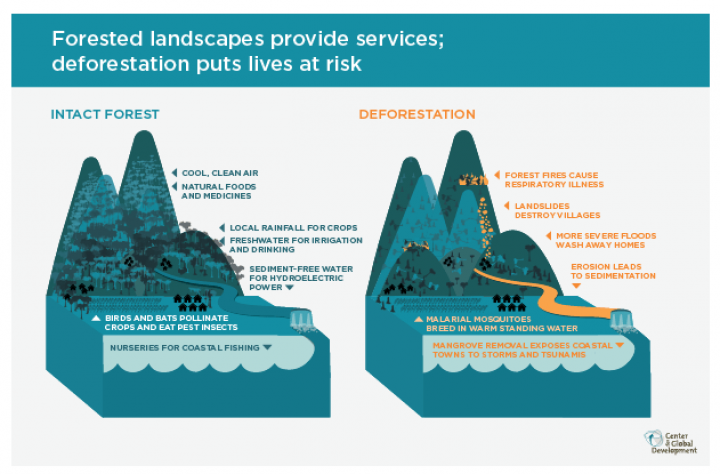 Governments have an indispensable role to play in setting and enforcing the legal and regulatory frameworks necessary to promote sustainable land-use and protect human rights. But businesses that finance or participate in commodity supply chains also have a responsibility to serve as agents of transformational change. Those that ask no questions about the sourcing of their products are part of the problem; those that engage supplier companies and governments in collaborations to ensure that supply chains are free of deforestation and rights violations are part of the solution.

4. Has progress been made? What are examples of initiatives that have emerged that can make a difference?

There are many reasons for hope. Government-to-government co-operation under REDD+ – a framework in which rich countries make results-based payments to developing countries for reducing emissions from deforestation and forest degradation – can help raise political attention and provide financial incentives for improved forest governance.

REDD+ initiatives have already stimulated important dialogues at the national level in many countries about the changes needed to reduce deforestation, and have catalysed improvements in forest monitoring capacity. Unfortunately, REDD+ remains vastly underfunded, so the prospect of financial reward for reducing deforestation remains slim for most forest-rich countries.

Technological advances are another reason for optimism. Satellites can now detect tree-felling at sufficiently high resolution and timeliness to enable authorities to respond immediately to alerts of illegal logging and forest clearing, such as those provided by Global Forest Watch. This data on deforestation can be combined with information on commodity production and trade, allowing companies and their watchdogs to trace products back to their point of origin to determine corporate compliance with “no deforestation” commitments.

Finally, norms are changing. In countries such as Indonesia, where until very recently indigenous people’s rights were a taboo topic for discussion, President Widodo has now recognised two sets of customary indigenous territories on forest land previously claimed by the state. And in the new deforestation frontier – West and Central Africa, seven African governments have committed to sustainable palm oil production supported by global and national buyers and producers. 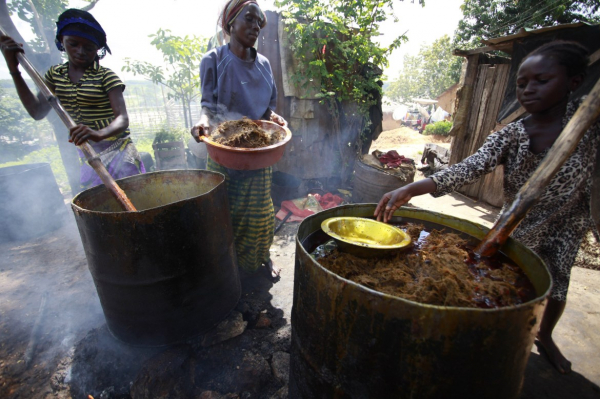 5. It sounds like there is real opportunity for action. What will you be prioritising for 2018?

For a number of reasons, 2018 is the year to focus on action at the scale of forest-rich jurisdictions – not just at the level of forest-rich countries, but also states and provinces, and even districts. Often that’s the scale at which land-use decision-making takes place, so it’s critical to align political and economic incentives for elected leaders to embrace forest conservation. As was demonstrated by Brazil’s success in dramatically decreasing deforestation in the Amazon a decade ago, preferential access to markets and finance can be important complements to command-and-control approaches to forest protection.

This year will see a renewed emphasis on increasing the ambition of “nationally determined contributions” (NDCs) toward achieving the goals of the Paris Agreement, and it’s essential that the mitigation and adaptation potential of forests is adequately reflected in those plans. And with the Global Climate Action Summit to be hosted by Governor Brown in California in September 2018, emphasis will be on what state and local actors can do, even in the absence of national-level leadership, as we’re experiencing in the US. Forests need to be on that agenda as well.

I see great potential for collaborations among government, private sector, and civil society actors to address the drivers of deforestation at the sub-national scale. The Tropical Forest Alliance 2020 has already proven its utility as a multistakeholder forum at the global and national levels, and is now helping to facilitate such processes in particular jurisdictions. 2018 is the year to redouble our efforts to ensure their success.

The Science, Economics and Politics of Tropical Forests and Climate Change

The Commodities and Forests Agenda 2020