Indonesia’s forest fires: what you need to know

A state of emergency has been declared in Indonesia, as forest fires once again rage across parts of the country.  The disaster comes just months after forest and land fires spiraled out of control last year, sending choking fog across South-East Asia.

Where are the worst affected areas?

As satellite data of the fire hotspots shows, forest fires have affected the length and breadth of Indonesia. Among the worst hit areas are southern Kalimantan (Borneo) and western Sumatra. The fires have been raging since July 2015, with efforts to extinguish them hampered by seasonal dry conditions exacerbated by the El Nino effect. As well as Indonesia, the acrid haze from the fires is engulfing neighbouring Malaysia and Singapore and has reached as far as southern Thailand. 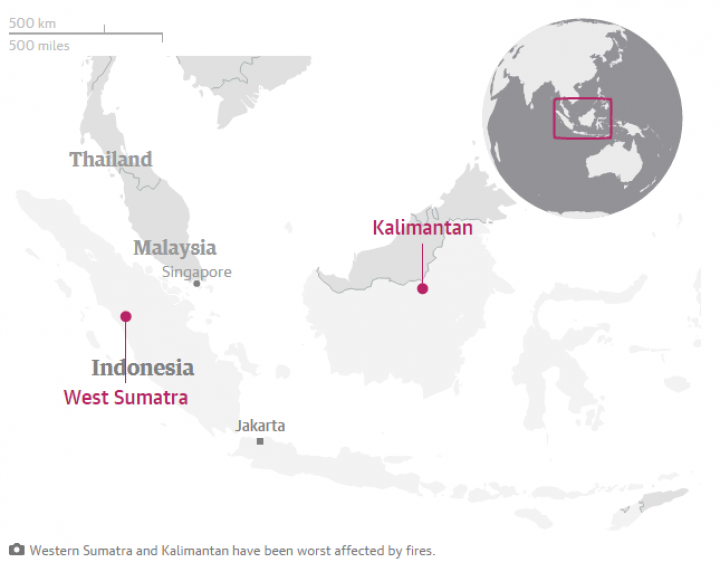 What is the damage?

The most obvious damage is to the forest where the fires are occurring. Indonesia’s tropical forests represent some of the most diverse habitats on the planet. The current fire outbreak adds to decades of existing deforestation by palm oil, timber and other agribusiness operators, further imperilling endangered species such as the orangutan.

The human cost is stark; by October 19 people had died and an estimated 500,000 cases of respiratory tract infections had been reported since the start of the blazes. It’s estimated that the fires could cause more than 100,000 premature deaths in the region.

Financial damage to the region’s economy stands at $16 billion, or almost 2% of Indonesia’s GDP, according to the World Bank. The institution also conducted a study into last year’s forest fires in Riau province, estimating that they caused $935 million of losses relating to lost agricultural productivity and trade.

What is causing the fires?

Forest fires have become a seasonal phenomenon in Indonesia. At the root of the problem is the practice of forest clearance known as slash and burn, where land is set on fire as a cheaper way to clear it for new planting. Peat soil, which characterizes much of the affected areas, is highly flammable, causing localized fires to spread and making them difficult to stop. 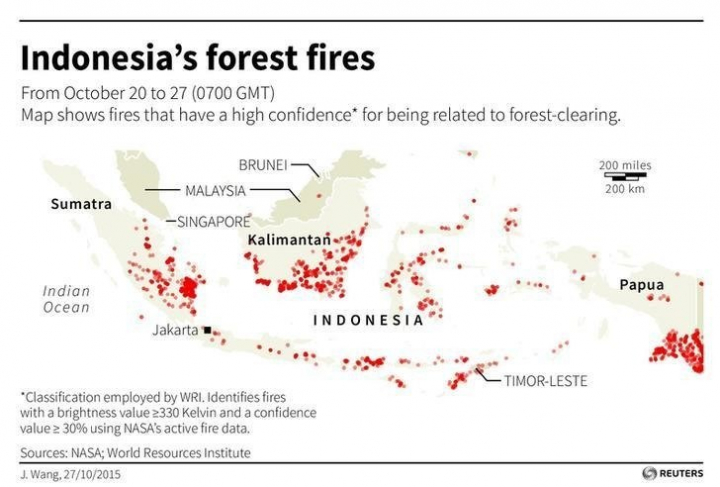 It’s a blame game, with everyone pointing the finger at someone else. Environmental group WWF Indonesia, which has been highlighting the problem of Indonesia’s recurrent fires for years, says that they are caused by the “collective negligence” of companies, smallholders and government.

Many blame big business. According to an analysis of World Resources Institute data in September 2015, more than one-third (37%) of the fires in Sumatra are occurring on pulpwood concessions. A good proportion of the rest are on or near land used by palm oil producers. “Many of these fires are a direct result of the industrial manipulation of the landscape for plantation development,” says Lindsey Allen, executive director of the conservation organization Rainforest Action Network.

Others look away from the big corporations for blame. According to Henry Purnomo, professor at Indonesia’s Bogor Agricultural University and a scientist at research group CIFOR, there are two culprits: poor small-scale farmers looking to expand their farmland, and rogue operators intent on illegally clearing forests for land acquisition. 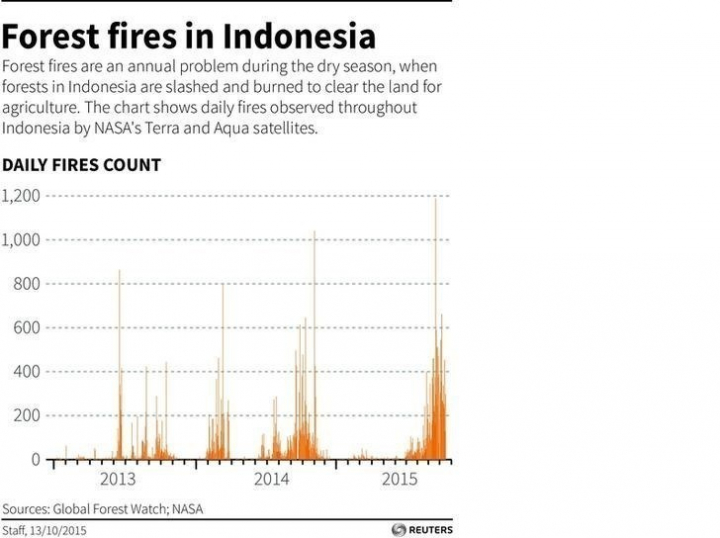 What needs to be done?

Ending the practice of slash and burn is vital. Companies – big and small – must be held to account, before the law and the market, if found culpable.

Smallholders need assistance and incentives to pursue alternative, less harmful practices of forest management. Forest-dwelling communities often lack the skills and training, according to a recent CIFOR report. Meanwhile processors and buyers often fail to pay smallholders a fair price, something the signatories to the Sustainable Palm Oil Manifesto (which claims to go beyond RSPO certification standards) have pledged to correct.

Many big firms, such as palm producer Wilmar and timber giant APP, have signed zero-deforestation pledges in recent years. But the real test comes in pushing their commitments beyond the boundary fences of their plantations and down into their supply chains, where smaller firms operate with less public scrutiny.

Another major contribution to reducing future fires would be an up-to-date online, searchable land registry. Land tenure in Indonesia is often unknown or disputed, making it difficult to establish where responsibility lies. Coupling such a database with digital mapping technologies such as WRI’s Global Forest Watch could make identifying the culprits a whole lot easier. One Map, a government-backed project to develop such a spatial mapping solution, is currently under development.

Oliver Balch is a freelance writer specializing in the role of business in society. He is the author of Viva South America! and India Rising: Tales from a Changing Nation.