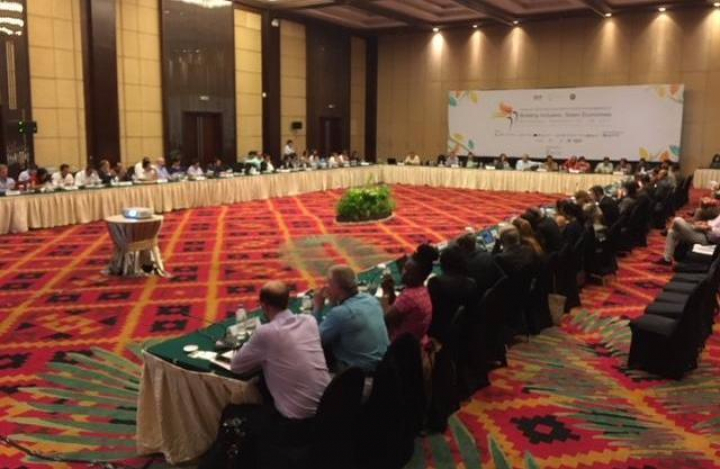 The meeting you see in this photograph is not a United Nations event. The people who are seated around the table in Balikpapan, East Kalimantan, Indonesia represent the 38 members of the Governors’ Climate and Forests Task Force (GCF)—states and provinces that are poised to do their part in keeping the climate livable.

For me, this is an image of hope. The GCF network is focused on one theme: realizing the potential of tropical forests as one of the biggest opportunities for solving climate change. To this end, two GCF processes were launched in Balikpapan: the first to solve tropical deforestation caused by commodity production and the second to support stronger partnerships between indigenous peoples and GCF government members.

These issues are deeply intertwined. And both issues can only be solved when local and regional governments—and the public policies, fiscal incentives and law enforcement that they command—are leading the way.

EII supported the GCF Secretariat in Balikpapan and has teamed up with the GCF to organize two important events at the COP23 UN Climate Conference to seize these opportunities, on November 12th and 13th. Learn more about them here.

Here are answers to the questions we most frequently receive about this work.

Slowing and reversing the world’s massive loss and degradation of tropical forests seems like a no-brainer…until you get to know an active deforestation zone. Believe me, after living and working in Amazon deforestation frontiers over the last few decades, I can say with confidence that there are no silver bullets. People clear and thin forests with remarkable efficiency when they can make a lot of money by grabbing natural resources that lie in or under these forests, or converting the land to other uses. Other deforesters are more amenable to sustainable development, seeking to build responsible businesses and prosperous lives for their families growing food or other products. For many others, felling small plots of forests to grow subsistence crops is a matter of survival.

The diversity of “players” on the deforestation frontier means that there is no “one-size-fits-all” solution. And to complicate matters, resource grabbers often exert considerable influence over the governments that control access to resources. But as many GCF member governors have shown, a growing number of governmental leaders are choosing the path of sustainable development—especially if they believe that markets, investors and donors will recognize and reward their leadership through new partnerships.

Replacing forest-devouring activities with forest-nurturing activities is possible, but only through big, local investments in law and order, through local government partnerships with businesses, investors and donors, and through effective incentive systems that favor sustainable land uses through both sticks and carrots.

After COP23 in Bonn ends next week, I will share our perspective on the steps that can be taken to nurture tropical forests—globally.