4 ways to harness data to stop deforestation in supply chains

In 2019, the world was gripped by wildfires raging across swathes of the tropics – alarmingly, in the Brazilian Amazon, the dry forests of the South American Chaco and the rainforests of Southeast Asia.
Behind most of these fires were deliberate attempts to clear forest to make way for commodities such as soy, beef and palm oil.
While images of the fires and their destruction quickly went viral, some crucial information was largely hidden from view: the global actors who stand to benefit from commodity production on the newly cleared land. Whether they know it or not – and many may not – the actions of companies, investors, governments and others in these supply chains are critical to combating future deforestation.

The right data can help identify priorities for action – whether to strengthen enforcement on the ground, change sourcing practices and trading relationships or guide investment decisions.
But what is the right data? How much do we already have? And how do we harness its potential?
The data revolution summons tantalizing visions of ever-more-detailed datasets – of quantitative data measuring what was previously unmeasurable. But while new data is are sometimes needed, whether for driving down deforestation or addressing some other pressing sustainability challenge, it’s not always necessary to pay for new, expensive data solutions. Instead, it’s often about being more creative in using data we already have.

Here are four ways to harness data to stop deforestation in supply chains.

1. Don’t assume you need the most detailed data to drive change.

It’s often assumed we need the highest-resolution satellite data or the most detailed farm-to-fork traceability before we can take effective action on supply chain sustainability.

We don't. Constantly waiting for the next leap forward in data can lead to delays – and even become an excuse for inaction.

In many cases, we already have sufficiently detailed data, and more detail does not necessarily help. For example, satellite images at resolution of less than one metre, and sub-daily revisit frequency, are already available for virtually any location on the planet. These images can have truly mind-blowing applications, but they’re often completely superfluous for determining where deforestation is happening, or where forests are burning.

And while farm-to-fork traceability sounds ideal, commodities like soy and palm are aggregated and processed so many times along supply chains that physical traceability is often neither practical nor, in the end, meaningful.

When it comes to using data, we need to look for the sweet spot between what is so coarse-grained as to tell us nothing and so fine-scale as to be unfeasible.

The Trase supply chain transparency initiative (www.trase.earth) is built on this assumption. It combines data sources to map the supply chains of a whole commodity, like the Brazilian soy crop exports, from subnational producer regions, via trading companies, to the countries importing the soy. Without knowing exactly which farm produced which soy, this is enough detail to link key markets and companies to specific, localized deforestation risk. For example, China imported over 50 million tonnes of soy from different parts of Brazil in 2017, but 80% of the deforestation risk was concentrated in one region – Matopiba in the north of the Brazilian Cerrado – which contributed just 8% of supply. This is enough information for buyers to know where they need to engage and invest the most – including through their acquisition of new infrastructure and soy facilities – to improve the sustainability of their sourcing.

2. Look for new and creative ways to use existing data.

The power of a lot of data lies in using it for purposes for which it was not originally intended.

Many agencies and actors far removed from the sustainability agenda are collecting potentially useful datasets. In fact, Trase’s entire supply chain mapping uses data collected for other purposes, such as tax records and customs declarations. For example, Trase recently used records of livestock movements originally collected for sanitary controls to connect indirect suppliers of cattle with Brazilian slaughterhouses – essential information in a country where livestock are frequently moved between facilities hundreds of kilometres apart throughout their lifetimes. Trase's data on Brazilian beef export supply chains now reflects deforestation in the original production regions, not only the last temporary feedlot the cattle stayed on – a major breakthrough that didn’t require any new data.

The world is awash with datasets, in business, finance, health, education, science and sustainability. Comparing individual data points within the same dataset can tell us a lot about trends and patterns within what the data was originally meant to measure, but we can unlock even more insight by linking different datasets.

Trase first attributed deforestation risk to specific buyers and markets by meshing together deforestation data with subnational production statistics, tax registrations of producer and trading companies, customs and shipping datasets. We are constantly improving the reliability of our mapping, or mapping new supply chains, by integrating other datasets, like the slaughterhouse data mentioned above. 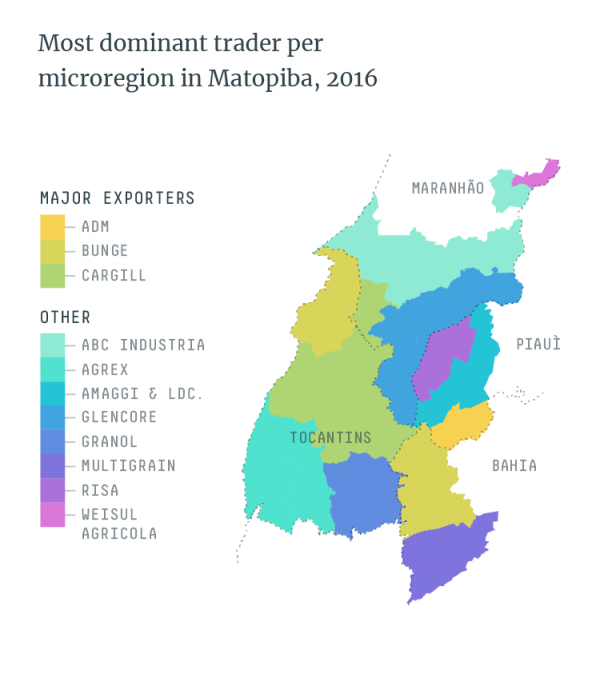 Figure 1. Trase data link companies to sourcing regions, making it possible to identify the most dominant traders exporting soy from the deforestation frontier of Matopiba in the Brazilian Cerrado (2016).

When you link one pair of datasets, other connections suddenly become possible – such as linking investors indirectly to the risk of deforestation exposure via the companies they own and invest in, or the use of animal movement data. Trase researchers have also combined trade data with data on individual ship movements and greenhouse gas and air pollutant emissions to calculate emissions associated with shipping commodities to different consumer markets.

Figure 2. Shipping emissions associated with the export of specific commodities from Brazil to specific countries a) soybeans, b) sugar and c) coffee. Redrawn from van der Loeff et al. (2018).

4. Don’t get distracted by the next big thing.

Resist being blinded by the promise of the latest new dataset or innovation in information technology. The reality is that most innovations are destined to disappoint or fail, draining our attention, energy and resources, and making us believe what we already have is not good enough.

Blockchain is a striking example. Despite the hype, blockchain suffers from the same shortcoming as all data systems: rubbish in, rubbish out. Blockchains don’t magically make the data accurate or the people entering the data trustworthy. How much energy has been wasted integrating blockchain into supply chains when it isn’t always clear whether it’s remotely operational or tells us more than what we can learn with existing data?

There’s an urgent need for decisive action to shift global commodity trade to more sustainable footing, curb the rise in deforestation and avoid another season of devastating fires in these fragile, invaluable tropical wildernesses.

The right data can help make sure we’re taking effective action – but data gaps should rarely be an excuse for doing nothing. This is true both for researchers working on practical solutions to sustainability problems, as well as businesses and governments looking for actionable information to implement solutions. We cannot risk that investing in data becomes the end goal.

Before assuming we need more data, always ask: What can we learn from data that’s already available? How much do we need to know to drive positive change? The answer to the first question is often more than we think, and the answer to the second is often less than we assume.

The need for more and better data will never go away – but many of the answers to questions of where and how we need to take action lie in data that’s already there. Now, we must get more creative in using them.

This article was published by the World Economic Forum