Where the Andes meet the Amazon, Poligrow and its local partners demonstrate how collective action can trigger a tropical renaissance, securing a resilient future for people and the natural resources on which they depend.

The frontier forest town of Mapiripán sits on the northern banks of the Rio Guaviare in the rural Meta region of Colombia. Its 3,200 inhabitants seek a resilient future in which their children can eat, be healthy and attend school. Yet for decades they have struggled to overcome a legacy of illicit cocaine production, political instability and violence at the hands of illegal armed groups. 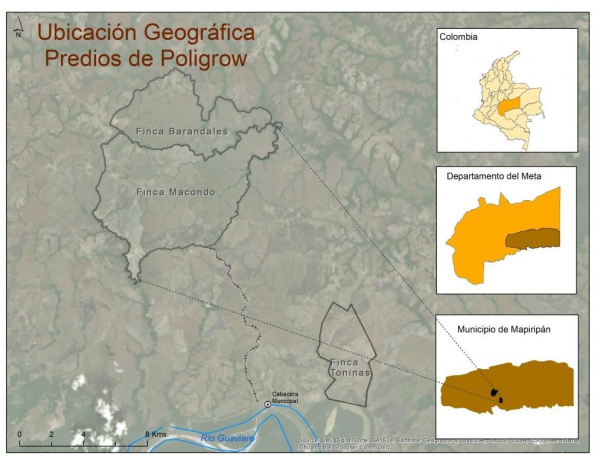 Ten years ago, they found a potential new ally in the oil palm agribusiness company, Poligrow. Demand for this cash crop is massive. The palm oil extract is a globally traded commodity found in 50% of supermarket goods, worth $70 billion worldwide.

Oil palm plantations drive 80% of the region’s economy, and the people of Mapiripán badly needed the 540 new jobs (indirectly supporting another 1,500) the company could create. Yet they wanted also to cultivate the long-term future of their living biodiversity and secure the resilience of their cultural heritage. Poligrow, aligned with these values, committed to a shared vision of sustainable environmental and social development.

Poligrow established a foundation to develop projects that would benefit its employees and the larger community, through events such as environmental week, sports for peace, farmer’s markets and kitchen gardens. Its scholarships helped top performing high school students pursue professional studies. Early on, it set up an electric utility that ensured previously weak and patchy currents now provided energy 24 hours per day throughout the year.

Trust, once broken, is hard to repair. The indigenous Jiw community had long suffered losses at the hands of outsiders. But now, working closely with Poligrow and the University of Los Andes, the tribal people drafted a legally binding communications protocol to govern the relationship, ensuring jobs, cultural respect, and care for indigenous rights.

Perhaps the most remarkable aspect of the collective action by people, business, and governments in Mapiripán is respect for ecological integrity. Not only has a sustainable crop taken root without displacing a single primary forest, but even within 7000 hectares of palm oil lands, 2,000 have been set aside for conservation.

Outside of these plantation landscapes, Poligrow helped raise the environmental baseline as it maps, measures, and monitors native habitats, topography, soil types, flora and fauna. Why bother? The data-rich information helps guide the company’s decisions in terms of what has value to the community, and which assets to protect, enhance, and replant.

The result is a mapping of 649 species of flora and fauna, including sightings of animals not previously reported in the region or the country. The parties have discovered a new species of blind snake, previously unknown to science, and captured on motion-sensor camera the first record of a puma hunting a deer within an African palm plantation.

The Churrubay conservation, research and environmental education project has held an “environmental week” each year for seven consecutive years, a pioneering initiative in the municipality to raise awareness of environmental issues.

The natural and human communities of Mapiripán have undergone a renaissance. In the process it has become a model from which the Tropical Forest Alliance continues to learn valuable lessons.

Indeed, the collaborative transformation toward self-sustaining governance – by local officials, growers, indigenous people, private companies, distant consumers, frontier communities, researchers, and a foundation – exemplifies exactly the kind of collective action that we need. It’s one that can be scaled and replicated not only across Colombia, but also in and around tropical forests worldwide.